BURN WITH ME — A Review of Joel Thomas Hynes’ Fourth Novel

Over the course of a year, I’ll read a ton of books, novels mostly but some nonfiction, too.  Often, these books are by authors whose work I’ve already enjoyed, or are titles that have been recommended to me by friends or family. Sometimes, I’ll pick up a new read simply because it’s getting a lot of buzz.  Rarely, however, do I fork over my hard-earned cash based solely on the title.

But such is the case with Newfoundlander Joel Thomas Hynes’ fourth novel.

As I usually do at work, I was listening to CBC Radio when Hynes was interviewed about his new release.  I hadn’t heard of him before, and so was only half-listening.  But then host Sheila Rogers dropped the title of Hynes’ novel, and immediately my curiosity was piqued.

We’ll All Be Burnt In Our Beds Some Night.

There’s something dangerously intoxicating about a title like that.  It’s both threatening and evocative, in turn conversational and cruelly prophetic.  It’s the kind of title that sits in the back of your mind and never lets you forget it.

When I did eventually get my hands on a copy of Hynes’ novel, I found myself immediately enraptured with its story. 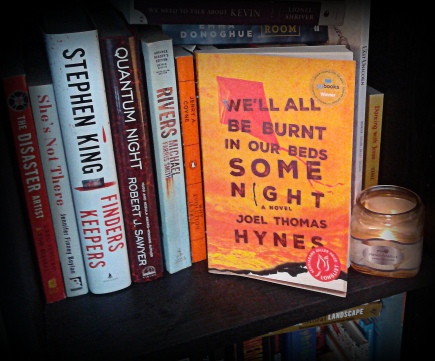 Joel Thomas Hynes dedicates his novel to the “myth of the friendly Newfoundlander.”

It begins with Johnny Keough, a wrong-side-of-the-tracks kind of guy who’s awaiting trial for an assault charge involving his girlfriend (whom he allegedly hit with a teapot).  But when his girlfriend dies from a sudden fatal accident, Johnny is off the hook.  In shock and grieving, he sets out on a cross-country hitchhiking journey, hoping to reach the west coast and scatter his girlfriend’s ashes at a beach on the outskirts of Vancouver.

By no means is We’ll All Be Burnt In Our Beds Some Night a novel for the faint of heart.  Its subject matter is dark and troubling, its language colloquial and crass, and its main character neither typical nor even “likable.”  Many have compared it to Irvine Welsh’s novel, Trainspotting (which became the movie of the same name), and that comparison is not unwarranted, but is also beside the point.

At its heart, Haynes’ novel is a story of self-reflection and discovery, of regret and loss.  It leaves us wrestling with the cruel realities of modern life, while also leaving us with a new perspective on those among us we’d usually cross the street to avoid.

For me, We’ll All be Burnt In Our Beds Some Night reads in part like a cautionary tale.  Strangely, I see myself in Johnny.  While on the surface we are nothing alike (I neither drink nor do drugs, and have never spent any time in jail), I’ve come away from the novel feeling a great empathy for its protagonist.  What separates us isn’t something inherent within ourselves (i.e. I’m not inherently a better person), but a difference in upbringing and opportunity.  Given the same circumstances, I may very well have ended up no better than him.  That isn’t to justify some of the things Johnny does in the novel, but to recognize that they come as a result of a whole myriad of interconnecting causes, and not simply because Johnny is a bad guy.

Given the current political and cultural climate, this is a valuable lesson.  Too often we simplify and over generalize those who are not like us.  People on the left do it to those on the right, and people on the right do it to those on the left.  Lately, many of us have become so zealous in the defence of our causes that we demonize anyone who questions our thinking on a given movement or cultural moment, let alone dares to outright disagree with it.

Imagine, then, how we characterize those who not only disagree with us, but differ from us in seemingly all other respects, as, say, Johnny Keough does with me.  The truth, of course, is that our differences exist only on the surface.  What connects us is our humanity, our individual and collective search for love and acceptance.  While we might not all be literally burnt in our beds some night, life will inevitably get all of us one way or another. Perpetuating the political, cultural, and class divisions that have divided us throughout history ensures only that we will be alone when it does.

Opinion is a sometimes column of just that, my opinion. While opinions are like noses and everyone has one, mine are especially snotty. Please leave a comment or question—all opinions are welcome, and all contributions are greatly appreciated. If you like what you read here, please subscribe.