This blog post is a day late. No, I wasn’t slacking yesterday; actually, I was being way more productive than usual. With my dad’s help (because God knows I wouldn’t have done it on my own), I installed an exhaust fan in my bathroom. It involved crawling around on my stomach in the attic, drilling and cutting through the bathroom ceiling, running wire, cutting a hole in my roof, attaching insulated duct, and all other such shenanigans that go along with these kinds of projects.

On the whole, I don’t enjoy renovations. Not one bit. Like I said, if I didn’t have a helping hand, I would take the lazy way out and pay someone several hundreds of dollars to do this kind of work for me.

I’ve owned my own house for almost two years now. Those who know me outside of this blog will have heard me complain about it, I’m sure. It’s not that I exactly hate owning a house, it’s just that blunt force trauma to the head is a lot more fun. There are trade-offs, of course. With the added space of a house, I was able to adopt a dog. And I’m kind of crazy for my dog. 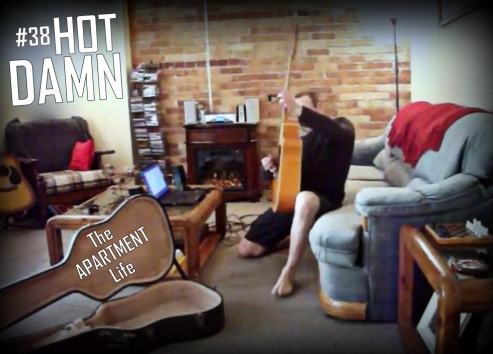 This is me, rocking like a lazy schmuck in my old aparmtnet

But I’m here today to celebrate the alternative. Yes, most people aspire to home ownership; story goes, that’s how you know that you’ve transitioned to full adulthood. You’re all growed up. Too often we look down upon those who are living in apartments.

We shall do so no longer. Because apartments are the best.

With no disrespect to my house, who’s a broad old codswallop of a home, apartment living is just fantastic.

Admittedly, I had a great landlord, and that’s not always the case for apartment dwellers. Still, there are some serious advantages to living the renter’s life.

REASON THE FIRST: You don’t have to do shit…

If something goes wrong – be it a blown pipe or a faulty heater – you do not have to fix it. Actually, you’re invited to bugger right the hell off because you’ll likely just make it worse. So sit back, relax, and let the handyman take care of your structural woes (and at no extra cost to you). In a house, it all falls on you. Fix it yourself (and risk looking like a putz when you make it worse), or fork out some hard earned cash to get someone else to do the job.

REASON THE SECOND: Crazy neighbours are a hoot…

For the most part, my apartment was reasonably sound proofed, with one exception: the bedroom closet. No, I didn’t deliberately listen in on my neighbours. Not at first. But their conversations were just so . . . well, earnest. Plus, the girl from next door was really nice, and it’s always fun to learn new things about nice people. By the way, my wife and I never actually learned her name; she was just “Nice Girl.”

Strange factoid, Nice Girl seemed to have a real affinity for Nicki Minaj’s song “Starships.” She played it on repeat with a disturbing regularity. I mean, how often can you listen to that song?

Then again, starships were meant to fly, am I right?

REASON THE THIRD: You don’t have to shovel the driveway or mow the lawn…

There’s nothing worse than coming home on a cold wintery day and discovering that, before you can go in and be the lazy schmuck you were destined to be, you have to shovel the driveway. You’ve been plowed in. Man, what a dick that snow plow guys is.

Same goes for the lawn during the summer . . . not that you ever get lawned in, but damn if that grass doesn’t grow fast. I mean, you just cut it last week and now here you are looking like the worst neighbour on the block. Take care of your lawn, dude.

But remember the days when you lived in an apartment? Yeah, you rocked it like a boss. All anyone ever saw of your place was your front door and you maintained that door like it was a suave little gentleman.

So, to all you renters out there, be merry. Don’t rush into buying a house. Sure, being a home owner has its perks, but so does renting. With an apartment, you save on time, and time is money. Also, you’re going to die some day, so . . . you know, time is kind of precious. But what do I know? I spent my Saturday making sweet love to blown attic insulation.

Did you miss last week’s entry on THE POSSIBILITY OF NO AFTERLIFE?  Catch up here.