In certain circles, not owning a cellphone can be a little embarrassing.

Okay. No, I know – you’re right. In almost all circles, not owning a cellphone is definitely embarrassing. It’s like admitting that you’re a little slow because all your life you’ve been chewing on AAA batteries to ease your social anxiety.

But, embarrassing or not, I’m one of those people . . . who don’t own a cellphone, that is. Let me be clear: I’ve never chewed on batteries.

And you know what? Not owning a cellphone has been swell. And here’s why: 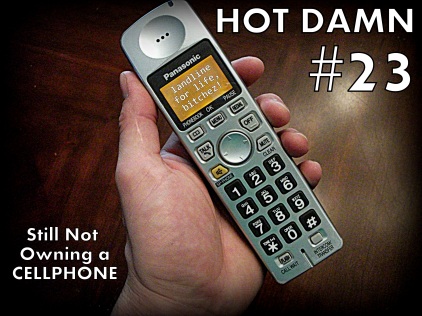 A coworker recently told me that they hadn’t had a landline in over 10 years. That made me disproportionately  sad.  I mean, God, am I really that far off the mark?  Well, yeah.

NO CELLPHONE BILL
I’m saving buttloads of money. This is a good thing, I think, since I don’t make a whole lot of it. Were I making what some of you are making . . . well, I might finally be able to buy that bejeweled boa constrictor I’ve had my heart set on for so long. That, and maybe some funnel cake. I haven’t had good funnel cake in years. You know, with strawberries and whipped cream? The whole shebang. God, that’d be nice. Maybe I should start playing the lottery again.

REAL CONVERSATIONS
People sometimes text me via my wife’s cellphone. But I hate texting. Part of the problem, I suppose, is that I refuse to write in anything but full, grammatically correct sentences. To do otherwise seems sacrilegious. Also, texting makes for a slow, dimwitted, Simple Jack kind of conversation. Here’s an idea – if you want to talk to me, then call me on my home phone. Or come see me. What would take five or ten minutes with short, knuckle dragging texts could be wrapped up in thirty seconds of actual conversation.

BEING LEFT THE HELL ALONE
These days it’s a lot more acceptable to be an introvert than it used to be. Actually, some people even take a certain kind of pride in being introverted. Not me, though. For me, all you need to know is that it’s best that you not interrupt me while I’m taking time out for myself. Case in point, if you call my home phone, don’t expect me to answer it. By all means, leave a message; if I like you, I will return your call . . . just not right away. Why? Because if you interrupt me during Me Time, it becomes You Time, and that’s rather selfish of you. You prick. With cellphones, it’s exponentially worse. If you text me, it’s expected that I’ll respond immediately. But you know what? I’d rather not. So piss on you.

The bitter truth, of course, is that I won’t be able to hold out forever. Our society is increasingly being built around the presumption that everyone owns a cellphone. Very soon, if not already, I will not be able to sustain my lonely man antics.

My wife (who’s sitting beside me) says that’s not true.

She says I’d just have a cellphone to check when nobody calls.

Did you miss last week’s entry on THE JURASSIC PARK FRANCHISE?  Catch up here.