CHILDHOOD INNOCENCE – It Doesn’t Exist, So Stop Trying To Protect It

Recently, a great many people in Ontario have been up in arms about the new sex-ed curriculum being introduced in Ontario public and separate schools. While I fully support the new curriculum, I also respect (to a reasonable degree) the opinions of those who do not. It’s their kids, after all.

And yet I can’t help but roll my eyes every time I hear a detractor brandishing “childhood innocence” and our duty to protect it as their main argument against the new curriculum. “It’s too much too soon,” they say. “We need to stand together and fight to safeguard the innocence of young children across the province.”

Back in the day I was pretty damn adorable, but don’t let that fool you.

I have two responses to that.

The first is to wonder why increased knowledge about sex, sexuality, and the conception of life would ruin a child’s innocence. It’s not as if your child will be shuttled off on a field trip to a local rub-and-tug or be introduced to the addictive joys of pirated online pornography. Come on, folks – sex is a good thing. I’m told that it’s kind of central to our existence. Knowing about it will not turn your kid into a raging sex fiend of unimaginable perversity.

The second response, though, is the more important one, and concerns the notion of childhood innocence. Simply put, I think it’s a load of shit.

Little kids, from infants to aspiring ten-year-olds, are many things – cute, carefree, silly, funny, loving, etc – but innocent is not one of them.

No, friends, what children are is ignorant.

To my mind, this whole innocence song and dance is merely projection. We project innocence onto the young because we feel we lack it in ourselves. We’ve grown old, and in our old age we’ve become cynical, bitter, heartbroken, and life-worn. We feel like we’ve lost something. Where is the joy? Where is the awe and wonder? More likely, though, is that we sense death looming far closer in our future than we’re comfortable with. Perhaps the loss we feel is merely an anticipation of this death – the loss of ourself.

Isn’t it tempting, then, to think that there is a time when life is nothing but purity and joy and new discovery, a time before life turns you sour and old?

Of course. But this isn’t innocence; this is ignorance.

Kids appear innocent because they’re constantly surprised and delighted by life, but let’s not forget that children can also be mean, manipulative, tyrannical, and extraordinarily violent little monsters. 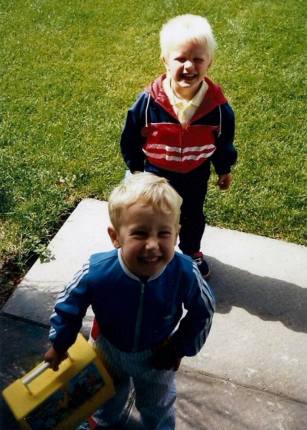 Yes, that’s me holding the infamous lunchbox, and that kid behind me is the one I hit in the face.

Case in point: when I was four, I once hit my best friend full in the face with my yellow lunchbox. Why? Because it seemed like a fun thing to do. Nothing more, nothing less. Then again, maybe I knew exactly what I was doing and simply thought my lunchbox was the best way to wipe that smug look off his face. Who can say, really?

But here’s the thing: kids do this kind of shit all the time. Ask any elementary school teacher; they’ll tell you.

And this is precisely why we send kids to school. It’s so they can learn not to be little monsters. I’m an adult now, and do you know what I don’t do anymore? I don’t say hello with a lunchbox to the face.

That’s the key to it all.

As I grew up, I didn’t lose my innocence; I gained civility.

And so when I hear detractors of Ontario’s new sex-ed curriculum rushing to the defense of childhood innocence, I can’t help but wonder what they’re really trying to protect: their children, or the façade that allows them to believe that their children won’t grow up to be as shitty as them.

Opinion is a sometimes column of just that, my opinion. While opinions are like noses and everyone has one, mine are especially snotty. Please leave a comment or question—all opinions are welcome, and all contributions are greatly appreciated. If you like what you read here, please subscribe.

One thought on “CHILDHOOD INNOCENCE – It Doesn’t Exist, So Stop Trying To Protect It”