And I say that with deep affection.

Over the years, I’ve listened to a lot of radio, and I mean a lot. Like an unhealthy amount. Because I’ve spent nearly fourteen years working in a shop where a radio is always playing, I’ve cycled my way through several stations, genres of music, and levels of patience.

Here’s the thing: radio isn’t meant to be listened to for nine consecutive hours, day after day. It just isn’t. The only thing that kind of consistency breeds is a deep loathing for whatever current hit is being played over and over again. That kind of shit is like a tumour – very slowly it kills you. 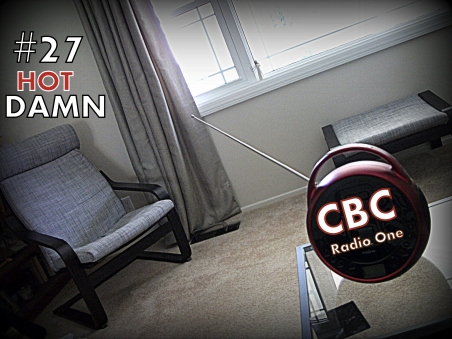 But there is a light at the end of the tunnel. And, yes, while that too might be a tumour, it’s a least a little more palatable.

And that light, dear friends, is CBC Radio One. Yes, the radio station listened to primarily by geriatrics. Oh, sure, they try to reach a younger audience, and they were doing a hell of a good job at being hip and cool and with it. But then hot shot host Jian Ghomeshi went and shit the bed, and much of the good work the CBC had done kind of went down the toilet. For a while, anyway.

But let’s forget Ghomeshi. He and Big Ears Teddy can get bent, tried, and thrown in jail.

What CBC Radio One has is variety, intelligence, wit, and humour. Oh, and don’t forget heart, because it has a whole lot of that (God, the number of times I’ve teared up listening to the damn radio is actually embarrassing).

Shows like (the new) Q, Definitely Not The Opera, Spark, White Coat Back Art, The Debaters, Under The Influence, Tapestry – these are what make my work week slide ever smoothly toward the weekend. They stimulate my mind the way rock and top 40 radio stations never could.

Don’t get me wrong; I’m not knocking music radio stations. I mean, come on — I love me my Rihanna (please don’t stop the music, am I right?). But there are only so many times I can listen to the latest hits or the old classics, and 412 times is not the magic number.

What it boils down to is this: CBC Radio One keeps me rolling. My job kinda sucks. I’m grateful for it, but it’s about as fulfilling as a colonoscopy. With the good old CBC, though, I make it through my days just fine, even if I am tearing up from time to time.

And I’ll take that over some generic rock station any time.

Did you miss last week’s entry on UNIVERSITY BATHROOMS?  Catch up here.